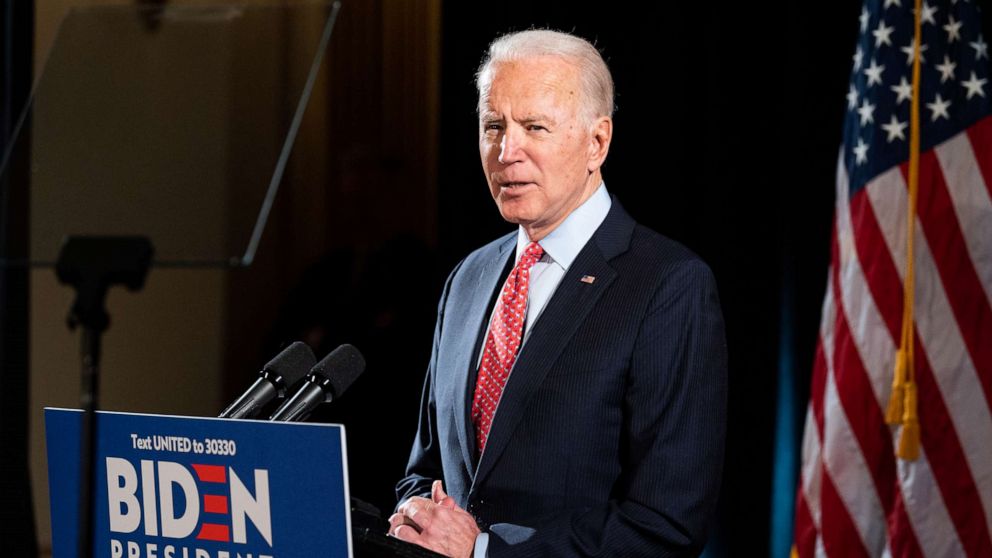 Former Vice President Joe Biden’s campaign is significantly expanding its operation in preparation for the general election fight against President Trump, announcing Friday that a slate of high-level hires will be announced in the next ten days and that they will employ a team of over 600 staffers devoted to battleground states by the end of June.

Biden campaign manager Jen O’Malley Dillon laid out the campaign’s growth in a presentation to reporters on Friday, expressing confidence that the former vice president is poised for a strong performance in November.

“We have a clear path to 270,” O’Malley Dillon said, referring to the number of electoral votes needed to win the White House.

“We are pulling ahead in Florida, in Pennsylvania, in Michigan, in Wisconsin and in Arizona. And if we kept these numbers, and we kept them through November, that’d put us at 318 electoral votes,” she argued, adding that the campaign is working to craft customizable messaging specific to key battleground states.
The campaign laid out a 17-state map they feel could help pave the way to the White House for the former vice president, categorizing the states as areas they need to protect, win back and states they feel present an opportunity to grow the traditional battleground map.

Florida, Iowa, Michigan, North Carolina, Ohio, Pennsylvania and Wisconsin, as well as one of Maine’s electoral votes, comprise the group of states the Biden campaign is hoping to win back following Clinton’s 2016 defeat.

The campaign identified Colorado, Minnesota, Nevada, New Hampshire and Virginia as states Hillary Clinton won in 2016 that they are aiming to protect this cycle, and in addition to Arizona is eyeing Texas and Georgia as states where they can expand the electoral map.

“I’m bullish about Arizona. Arizona is a battleground state for the first time, and it is a state where we are not only ahead, but we have a strong opportunity to build our unique pathway to victory,” O’Malley Dillon said, also signaling optimism about the Senate campaign of Mark Kelly, the well-funded Democratic challenger to GOP Sen. Martha McSally.
Biden’s campaign will also be growing their battleground state staffing, which still lags significantly behind President Trump’s operation, in the coming month, according to O’Malley Dillon, who said they planned to have more than 600 organizing staffers hired on.

While the organizers are expected to carry out traditional on-the-ground campaigning duties, the campaign stressed decisions on when that activity would begin would be made taking into account public safety.

“We will never make any choices that put our staff or voters in harm’s way or volunteers…Our expectation is we will have people on the ground in this campaign doing the traditional work of of organizing, but we will do that when safety allows,” O’Malley Dillon said, stressing that those decisions are dependent on the conditions on the ground in specific states.
The campaign also announced that they are continuing to expand their digital footprint, and that a new website and live-streaming platform will be rolled out this weekend.

Biden’s campaign made it clear they intend to push forward with a focus on the virtual campaign trail as the coronavirus continues to redefine the 2020 campaign, with a strategy that includes a “high volume of social-first” content.

The campaign did not offer any timetable for Biden’s physical return to the campaign trail amid the COVID-19 pandemic, which has taken in-person events off the table for the 78-year-old candidate.

“First and foremost, the most important thing for us and for the campaign is public safety and the safety of the Vice President, the people around him, the staff, the press corps, the Secret Service. His movement is a movement that requires a lot of people,” O’Malley Dillon said Friday, stressing that the campaign is listening to public health experts.

“We’re very conscious of what we are being told, what the country is being told, and we are going to ensure that we will travel physically to places when the time is right, driven by the experts and the guidelines that come and not a day before,” she said.
The campaign also announced Friday that in tandem with the Democratic National Committee, they have $103 million cash on hand following the month of April that saw them keep pace with President Trump and the Republican National Committee.

However they still face a significant resource deficit with their Republican counterparts. At the end of March the combined Trump reelection effort had over $255 million in the bank.
In addition to the staffing announcements, the campaign signaled that they are leaning heavily into the argument that November’s election will be a “referendum” on President Trump and his administration’s handling of the coronavirus crisis, messaging that Biden himself has consistently pushed in the weeks since the pandemic disrupted American life.

“I think one of the most remarkable things about this campaign so far is that the Trump campaign themselves would admit they could not win a referendum on this presidency in this country today. Matter of fact if the country is asked to have an up or down vote on whether or not Donald Trump should receive four more years, the country would say no, and [the Trump campaign] themselves admit it,” the Biden campaign’s chief strategist Mike Donilon argued during Friday’s presentation.

Donilon also dismissed the notion that attacks from President Trump and his allies will throw the campaign off messaging, positing that most voters are focused on the government’s response to the COVID-19 pandemic, and that any attempt to deflect from that conversation will be “rejected.”

“It seems to me that if you’re sitting in this country, and you’re wondering, what’s going to happen here, is the economy going to reopen? Is it really going to shoot up like a rocket like Trump said it’s going to? Are we going to have a reoccurrence or a spike in the virus? That’s what people are worried about. And if Trump and his allies try and drive a different sort of conversation in this campaign, I think it’s going to be rejected,” Donilon said.
“He doesn’t want to talk about the coronavirus and his reaction to it. He’s desperate to try to get any form of distraction from it,” Donilon said of Trump and his campaign’s effort to drive the narrative.

“Presidents get measured by how they are seen in a crisis,” Donilon said. “[Trump] didn’t act decisively, what he did was he froze.”,
ABC News