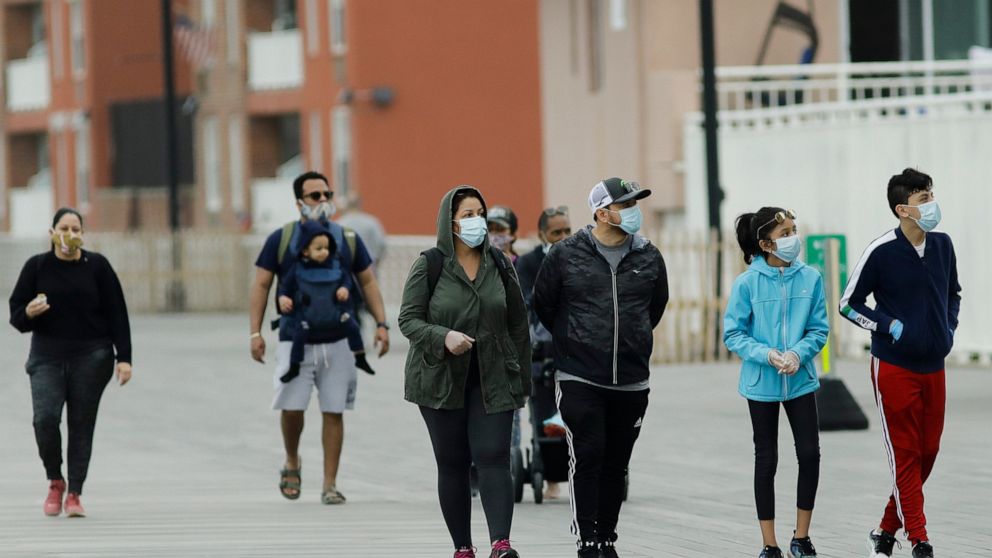 NEW YORK —
New Yorkers experiencing cabin fever after two months of coronavirus quarantine received an unexpected reprieve when Gov. Andrew Cuomo eased the state’s ban on gatherings in time for the Memorial Day weekend. But beachgoers faced inclement weather Saturday that dampened crowds.
A look at those and other coronavirus developments in New York:
———
DAILY DEATHS DROPPING
New York state on Saturday reported its lowest number of daily coronavirus deaths — 84 — in weeks in what Cuomo described as a critical benchmark. The daily death tally peaked at 799 on April 8.
Reducing the state’s daily death count to fewer than 100 seemed almost impossible several weeks ago, the governor said. That figure, considered a lagging indicator, has remained stubbornly high even amid other signs of encouragement.
“In my head, I was always looking to get under 100,” Cuomo said. “For me, it’s a sign that we’re making real progress.”
The number of hospitalized patients also continued to fall, dropping to over 4,600.
Cuomo announced that the Mid-Hudson region — the area along the Hudson River north of New York City and south of Albany — is set to begin reopening on Tuesday, and Long Island could follow suit Wednesday.
———
EASING RESTRICTIONS
Cuomo signed an order late Friday allowing people to assemble in groups of as many as 10 as long as they stay at least 6 feet from other people and wear masks when they can’t maintain that distance.
The surprise order came hours after the New York Civil Liberties Union filed a lawsuit challenging earlier rules allowing gatherings only for religious services and Memorial Day commemorations. The NYCLU argued the Constitution requires the same right be extended to people gathering for other reasons.
Cuomo’s move could clear the way for New Yorkers to picnic together in parks and backyards — if they don’t get too close to their friends.
They can also head to New York City beaches this weekend, but they shouldn’t expect to get in the water, and they’d better be wearing a mask.
While beaches elsewhere in the region will be open for swimming, Mayor Bill de Blasio has said swimming is not allowed at the city’s beaches and may not be all summer.
“I’ve been really clear about the beaches; they are closed for swimming,” de Blasio said Friday at his daily coronavirus briefing. “There will not be lifeguards. People are not supposed to go to the beach to swim.”
The danger of swimming without lifeguards on duty was made clear Friday when a 24-year-old man drowned off Rockaway Beach in Queens.
The main reason the mayor has cited for the swimming ban was to curb the spread of the virus by keeping people off public transportation.
Memorial Day weekend marks the beginning of beach season in New York City, with — in normal years — lifeguards starting duty and swimming permitted.
But the forecast was less than ideal for the holiday weekend, with rain Saturday and clouds expected Sunday.
At Orchard Beach in the Bronx, which was crowded a weekend earlier during ideal outdoor weather, the parking lots were largely empty except for the large puddles that had formed after a morning of steady rain and occasional rumbles of thunder. A traffic sign outside the park warned that there was no swimming or barbecuing allowed, but there were few people around to read it.
While beaches on Long Island or in New Jersey are usually reached by driving, city residents typically take the subway to summertime destinations like Coney Island or Rockaway Beach.
Under guidelines intended to keep crowds from flocking to the beaches, people who live nearby can go there to walk or to sit, de Blasio said. Hundreds of police officers and civilian city workers will be on hand to disperse gatherings that violate social distancing rules and to hand out masks to people who aren’t wearing them, he said.
“I’m very hopeful that this weekend at our beaches, you’re going to see people following the rules because they know it’s the right thing to do,” de Blasio said. “But if they need some reminders, of course there’ll be people out there educating, giving out face coverings.”
While most of New York state has begun to ease restrictions, de Blasio and Cuomo, both Democrats, have said that New York City, the epicenter of the virus outbreak in the United States, is still weeks away from starting to reopen.
———
DISCHARGES TO NURSING HOMES
Cuomo’s administration claimed incorrectly Saturday that it has released all the information it has in regard to an Associated Press request for the number of COVID-19 patients discharged from hospitals to nursing homes.
The AP compiled its own tally of the number of such patients discharged under a controversial order after the state Health Department refused to release an internal survey it conducted two weeks ago. The AP counted more than 4,500 recovering coronavirus patients sent to nursing homes.
But at Cuomo’s news briefing Saturday, aide Melissa DeRosa answered an AP reporter’s question about the internal survey by saying there isn’t “any information we have that we haven’t released at this point.”
The AP has not received the results of the survey, which it first requested May 15.
Cuomo again deflected criticism for the since-rescinded directive that required nursing homes to admit coronavirus patients. The March 25 order had been intended to help free up hospital beds for the sickest patients as cases surged, but critics have said it fueled deadly outbreaks among the state’s most vulnerable population.
“We’re in a political environment, I get it,” Cuomo said Saturday, insisting his administration followed U.S. Centers for Disease Control and Prevention guidance. “To the extent people want to politicize this issue … New York followed the president’s agency’s guidance. So that depoliticizes it. What New York did was follow what the Republican administration said to do.”
——— A previous version of this story corrected the headline to show that the governor is easing, not lifting, the ban on gatherings.,
ABC News 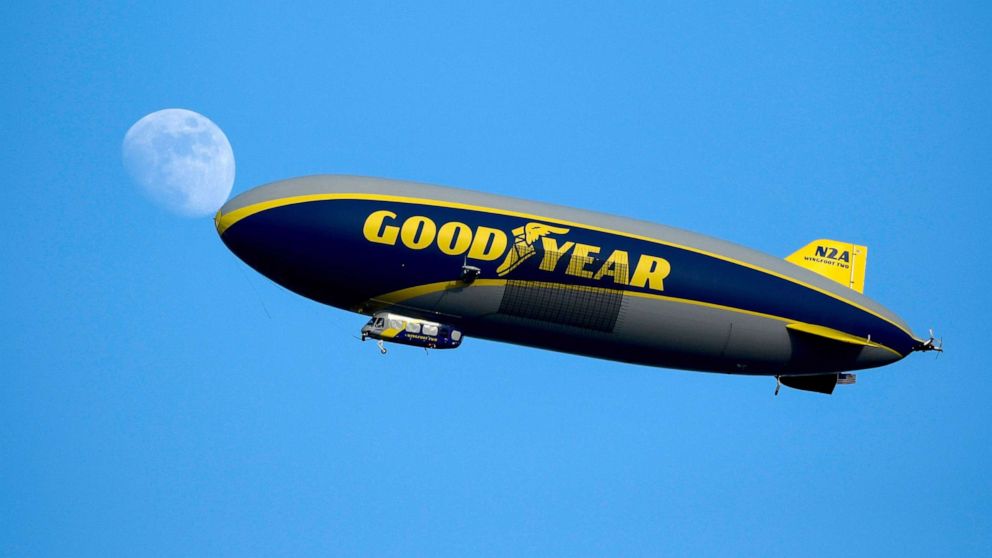 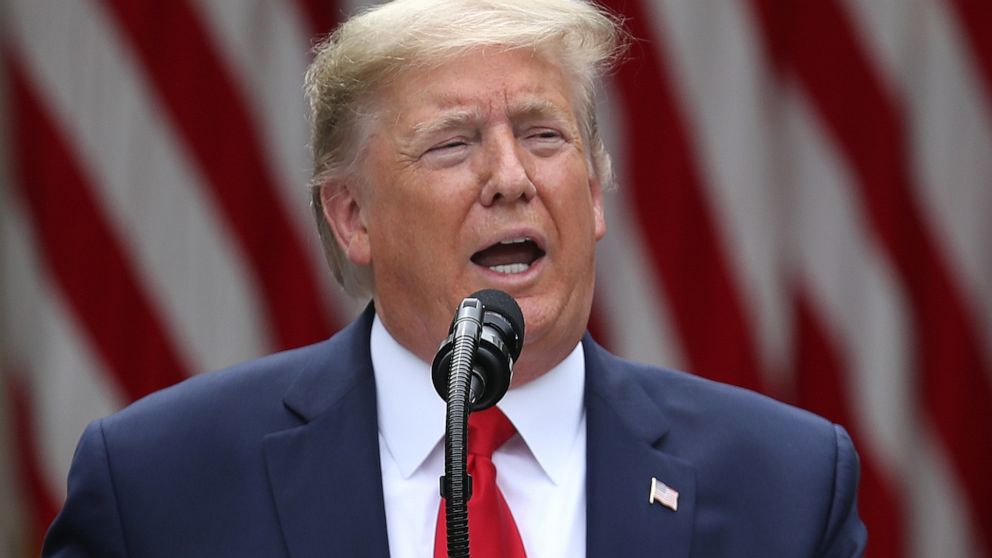 Trump on surprising jobless numbers: ‘We’re opening with a bang’ 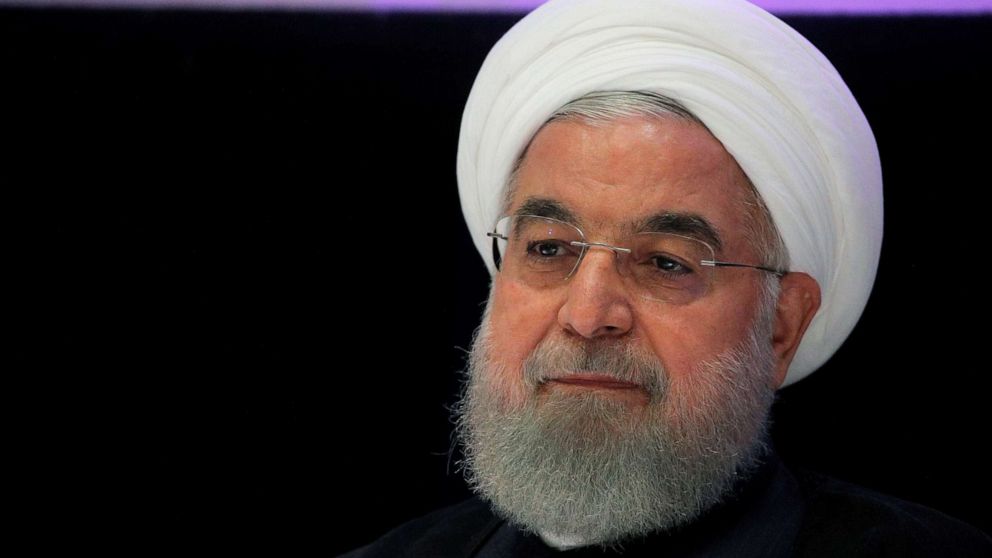