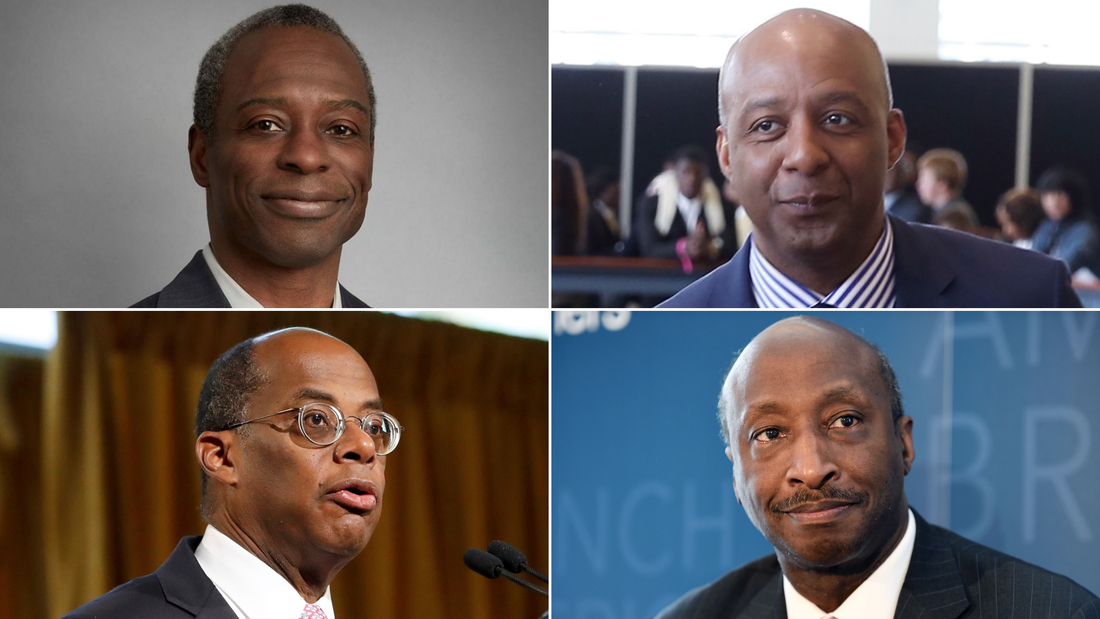 New York (CNN Business)Just four black CEOs run Fortune 500 companies in America, and three of them are speaking out about racial inequality following the death of George Floyd.That’s four black leaders among the largest 500 companies in the United States: Marvin Ellison of Lowe’s (LOW), Kenneth Frazier of Merck (MRK), Roger Ferguson of TIAA, and Jide Zeitlin of Tapestry (TPR). ‘This is personal’On Monday Jide Zeitlin, CEO of the luxury goods brand Tapestry which owns Kate Spade, Coach, and Stuart Weitzman, posted a personal message on LinkedIn to his employees. “I sat down several times to write this letter, but stopped each time. My eyes welling up with tears. This is personal,” Zeitlin wrote.Zeitlin reported that stores across the country were damaged from New York to San Francisco, but viewed the destruction as secondary to the broader issue.”We can replace our windows and handbags, but we cannot bring back George Floyd, Ahmaud Arbery, Breonna Taylor, Eric Garner, Trayvon Martin, Emmett Till, and too many others. Each of these black lives matter,” he wrote.Tapestry is making changes to address these inequalities, said Zeitlin, and over the weekend leadership worked to “convene a number of social justice, legal, and corporate entities to formulate a longer-term plan for addressing systemic inequality” in areas like health, economic opportunity, and public safety.”We hope to join with government, but events of this past week make it clear that we cannot wait,” he wrote in the letter.Zeitlin was born to a single mother in Nigeria before being adopted at the age of 5 by an American family who lived in Nigeria and employed his young mother. He spent 20 years at Goldman Sachs (GS) before coming to Tapestry.’Fear and frustration’Lowe’s CEO Marvin Ellison posted a letter to his team on Saturday. “I grew up in the segregated south and remember stories my parents shared about living in the Jim Crow South,” wrote Ellison. “So, I have personal understanding of the fear and frustration that many of you are feeling.”Ellison reiterated the company’s zero tolerance for racism and his commitment to fostering an environment of safety. Leadership will have new resources to better support employee and communities, the letter states.”At Lowe’s, we are committed to helping people make their homes better, and today, we recognize that our homes extend beyond our walls, and into our neighborhood, communities and country,” said Ellison.George Floyd ‘could be me’Merck CEO Ken Frazier told CNBC on Monday that he could have just as easily been George Floyd. “What the African American community sees in that videotape is that this African American man, who could be me or any other African American man, is being treated as less than human,” Frazier told CNBC’s “Squawk Box.”Frazier grew up in the inner city of Philadelphia in the 1960s during the time when Martin Luther King, Jr. was leading protests. Frazier said he was part of a handful of kids chosen by the city to be bused 90 minutes to white schools to get “a rigorous education,” where which he was just one of nine black students. Frazier says he was one of the lucky ones afforded an opportunity that set him on a different trajectory in life. But he noted the “huge opportunity gaps” still exist today.”It is the responsibility of corporate America to bridge those gaps,” Frazier said. “If we don’t try to create opportunities for these people to be employed — joblessness creates hopelessness.”TIAA did not immediately respond to a request for comment.,
CNN