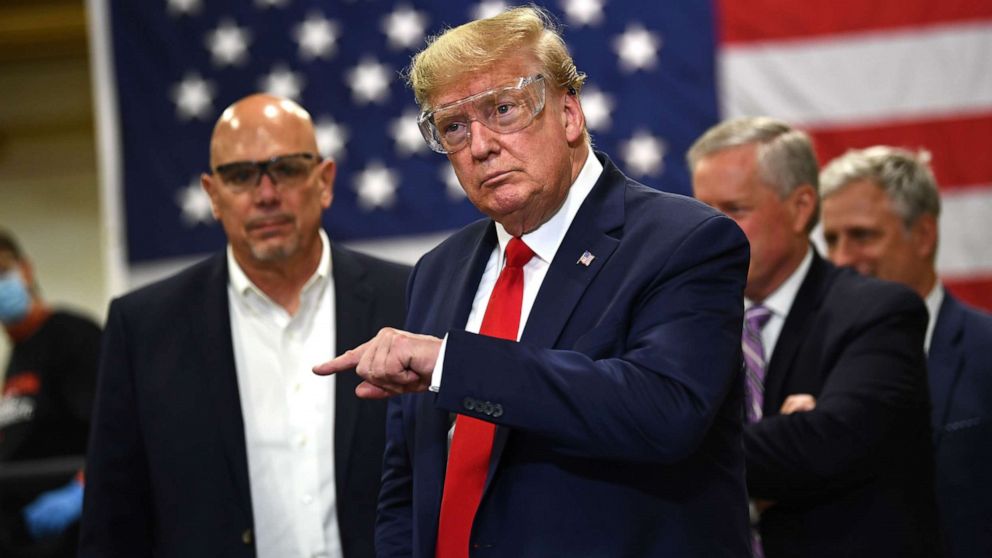 Ford has signaled it may allow the president to bend that rule. May 20, 2020, 9:19 PM8 min read
President Donald Trump has yet to publicly wear a face mask amid the coronavirus pandemic but is set to tour a Ford plant manufacturing ventilators in Michigan Thursday where masks are required.

The Ford policy at the plant couldn’t be any clearer: “Face masks are required to be worn by everyone, in all facilities, at all times. This measure of protection will remain in effect until such time as the COVID-19 virus is no longer a critical risk.”

But Ford officials have signaled they may allow Trump to bend that rule.

Rachel McCleery, a Ford spokeswoman, told ABC News the company has “shared our safety policies and recommendations with the White House in advance of this visit” but added that “the White House has its own safety and testing policies in place and will make its own determination.”
Tune into ABC at 1 p.m. ET and ABC News Live at 4 p.m. ET every weekday for special coverage of the novel coronavirus with the full ABC News team, including the latest news, context and analysis.

Trump has yet to commit to wearing a mask during the visit, saying on Tuesday that it would depend on the circumstance.

“I haven’t even thought of it. It depends. I mean, you know, in certain areas, I would. In certain areas, I don’t. But I will certainly look at it. It depends on what situation. Am I standing right next to everybody or am I spread out?” the president said.
“Is something a hospital? Is it a ward? Is it — what is it exactly? I’m going to a plant. So we’ll see. Where it’s appropriate, I would do it. Certainly,” Trump said, suggesting the setting will determine his decision.
The president went without a mask during a tour of a Honeywell facility that manufactures N95 masks in Arizona two weeks ago. Though that facility requires workers at the plant wear masks, the president said the company’s CEO told him it wasn’t necessary for him to abide by that policy. The president later told reporters he wore a mask for part of the visit, when he was backstage, but he was never seen wearing one before cameras.

Trump’s trip to Michigan will take him to a another political battleground state that, like Arizona, that could prove key to his reelection.
He has repeatedly attacked Michigan’s Democratic governor, Gretchen Whitmer, for her handling of the COVID-19 pandemic, saying she has been too slow to roll back restrictions, derisively referring to her as “that woman from Michigan,” and voicing support for protesters, some of them who stormed the state capitol brandishing guns, unhappy with her stay-at-home order.
Whitmer, a possible vice presidential pick for the presumptive Democratic presidential nominee, Joe Biden, has said data and key indicators are driving her approach to reopen the state in a safe manner.. Trump’s criticism of her came after Whitmer said the federal government had been slow to respond to the pandemic.

A spokesman for Whitmer’s office said Trump’s visit technically violates the governor’s ban on non-essential visits to manufacturing facilities like Ford’s but noted it was “an opportunity to showcase how important Michigan is to the response to COVID-19 and rebuilding our nation’s economy,” the Detroit Free Press reported Tuesday.

Whitmer’s office said she did not receive an invitation to participate in Trump’s stop in her state, according to the Free Press. “I don’t think there was a particular reason” she was not invited, White House press secretary Kayleigh McEnany said Wednesday. “It didn’t come up.”

The Ford facility the president will tour on Thursday began manufacturing ventilators in collaboration with General Electric the week of April 20, according to a White House official, with the goal of building 50,000 ventilators from the facility over 100 days.
The president, who is also expected to deliver remarks during the visit, is expected to tout the progress made in ramping up ventilator production in the U.S. in recent months in response to concerns that there could be a shortage of the life-saving devices for COVID-19 patients.
The president has taken to referring to the U.S. the “king of ventilators” and touts that the worst-case scenario of a shortage of ventilators has not come to pass.

The president has marveled at the mechanics of the machines, calling them both “clumsy” and “highly sophisticated” and even comparing the process to manufacturing a car.

“It’s like building a car. And other countries don’t have ventilators. And we became so successful in ventilators and building this very complex machine, very expensive machine — but very, very complex to have it right, to do it right. Highly computerized. Very technologically significant,” Trump said recently.
What to know about coronavirus: How it started and how to protect yourself: coronavirus explained What to do if you have symptoms: coronavirus symptomsTracking the spread in the US and Worldwide: coronavirus map,
ABC News 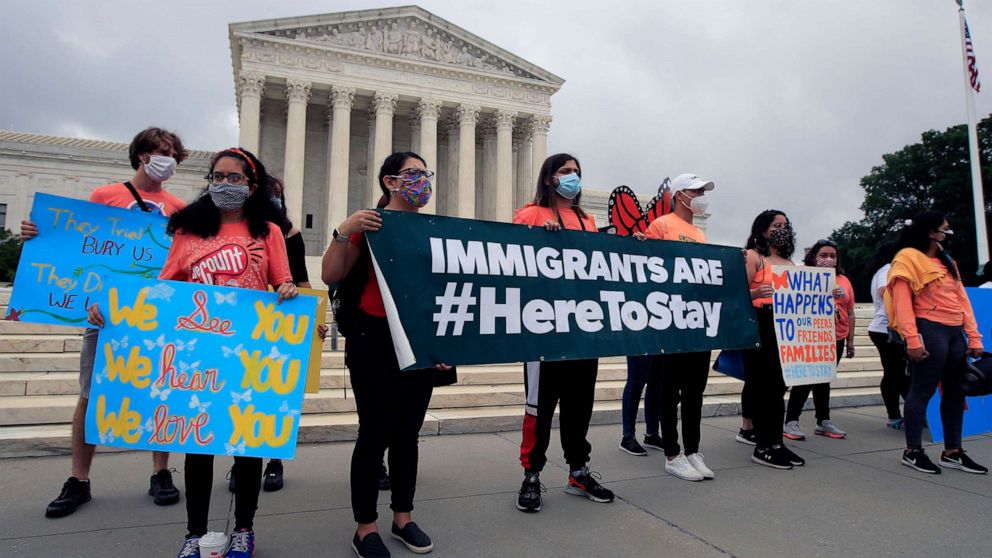 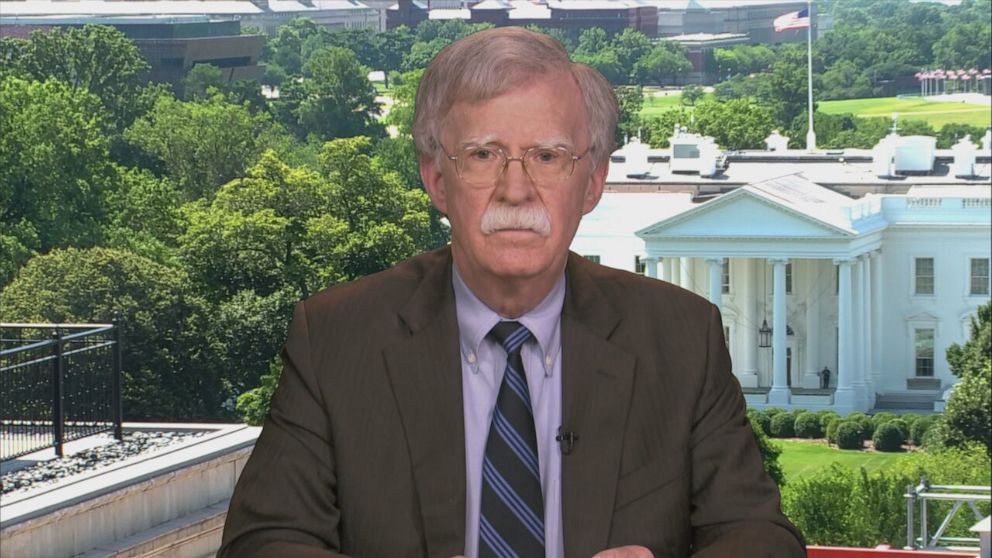 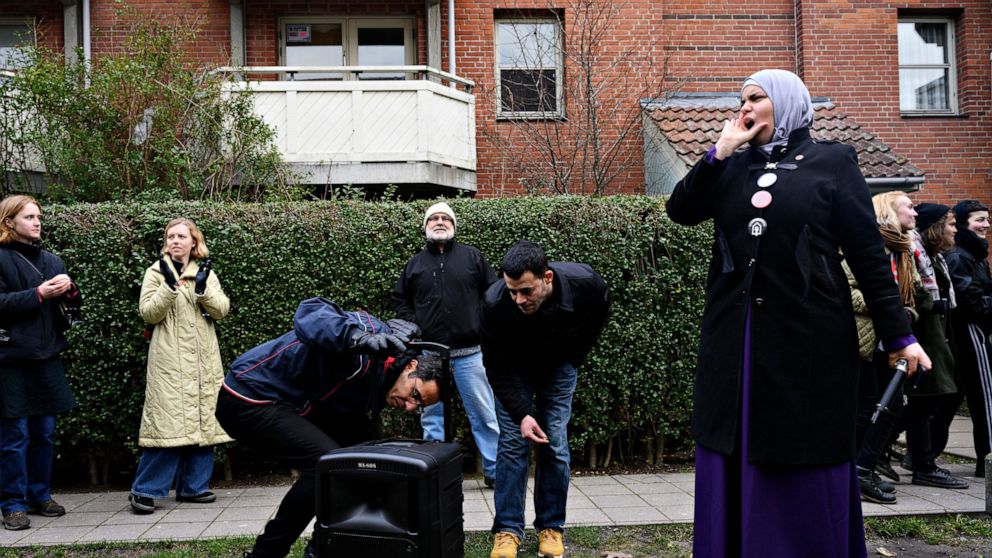