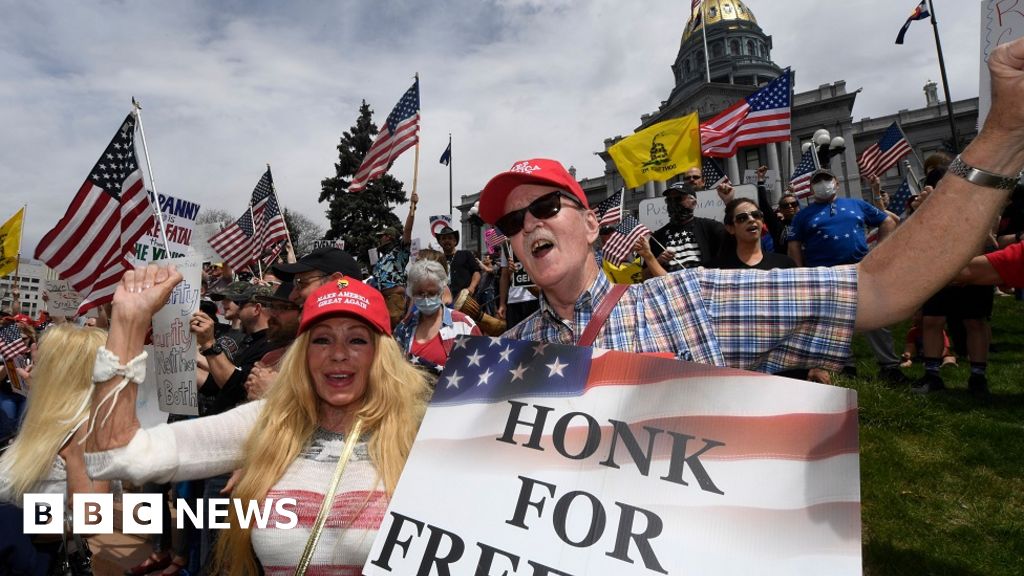 In these times, the sight of a public gathering of hundreds of people mostly without face masks is alarming.But that is what happened at a demonstration against the shutdown measures in Washington State.”We believe that the state governor has gone beyond his constitutional authority in shutting down businesses and ordering people to stay at home,” organiser Tyler Miller says from the grounds of the state capitol.In mid-March, Washington Governor Jay Inslee announced an emergency proclamation mirroring many issued around the world; closing restaurants and bars and banning large gatherings.But protesters say that was unconstitutional.”The state constitution says that the right of the people to peaceably assemble shall never be abridged. We believe that the (emergency coronavirus) proclamations that the governor here ordered violate that,” Mr Miller says.Mr Miller said he was not protesting against the recommendations from the public health bodies and respected the need to ‘flatten the curve’.”I even self-quarantined for 14 days back at the very beginning of this myself, when I had an illness that mirrored some of the symptoms,” he says.”The fact I am protesting does not mean I think it is a good idea to have gatherings, I just believe that the government has no authority to prohibit them.”Throughout the crisis, Mr Miller has also been able to continue his work as an engineering technician with the US Navy.He says the thing that has angered him is what he feels is an un-American overreach of power by the Democratic governor.The restrictions differ from state to state, and about 20 states have had protests against the measures. These demonstrations vary in size from a few dozen people to thousands.They come as the US finds itself still very much in the grip of this crisis.

Media playback is unsupported on your device

Media caption’We want our lives back now,’ say protesters
There has not yet been a sustained drop in the numbers of US deaths linked to Covid-19 and yet the clamour to lift restrictions is coming not just from those taking to the streets but from politicians too.”The hysteria that surrounded the coronavirus from the beginning was disproportionate,” says Rick Becker, of North Dakota.”There was an overreaction by state governments with regard to mandatory shut downs, shelter in place, and so forth,” he says.When it is put to the state representative that tens of thousands of people have died across the country and that it could have been many more if restrictions were not in place, he dismisses the notion.”That is something that you’re going to be able to say no matter what; that there may have been more deaths,” says Mr Becker, who is also a qualified doctor.”You’re taking the ‘if it saves just one life’ argument, and I would say that if I would drive 20mph instead of 50mph, it’s possible that I might not kill somebody, and you can look at all aspects of our lives that way. But our whole way of life in this country would collapse and we can’t live life that way.”

Media playback is unsupported on your device

Media captionCoronavirus: Millions of Americans unemployed
In neighbouring South Dakota, one of those who died with the coronavirus was Bob Glanzer, a state representative.”He was a very caring, giving, listening type of individual and certainly faith was a big part of his life. He’s going to be sorely missed in the legislature,” says party colleague Jean Hunhoff.Representative Hunhoff describes how she and other legislative members lined the route of Mr Glanzer’s funeral procession waving American and South Dakota flags.There were social distancing measures in place for the commemorations, even though South Dakota is one of a handful of states where a state-wide stay at home order has never been imposed.”I support the decisions of our governor. She laid out guidelines and then really left the decisions up to local communities,” says Jean Hunhoff, who also has a public health background.

“I am a registered nurse and I believe it is data that should drive decision making and I think we have done that here. It is easy to stand on the outside and post judgment.”There has been criticism of states like South Dakota that have refused to issue state-wide shut down directives in spite of coronavirus outbreaks there.Polls show the majority of Americans are still in favour of measures imposed to try to curb the spread of the virus. And some are vehemently opposed to the protests.Mary Turner, a nurse leader in an intensive care unit in Minnesota, describes them as a “kick in the teeth” because of the risks she and her colleagues are taking.”These protests here are so discouraging. With no one doing social distancing or wearing masks, and they all say they are outraged. I don’t know if this is a problem anywhere else in the world.”But the placards at the demonstrations decrying government interference suggest those involved feel there are bigger issues at stake than public health.”Scepticism of the government is a deep strain in America. It waxes and wanes – though we’re in a period where it’s been waxing for quite a while,” says Theda Skocpol, author and professor of government and sociology at Harvard University.With regard to the anti-shutdown protests, Professor Skocpol says it is political beliefs and not economics that have definitely been the driving force.

She cautions against the notion that they are an organic reaction to the crisis, feeling instead that there is a level of national organisation.”You don’t see the US Chamber of Commerce in the vanguard here. These are ideological forces at play, with some professionally run conservative advocacy groups behind the protests,” Professor Skocpol says.”Their cause is to make sure Americans don’t become too trusting of government. They don’t worry whether the motives of the people on the ground are exactly the same as theirs. They’re probably not. I think most of the people at the protests are just passionate Donald Trump supporters.”While some at the protests say they are there because they are losing money during the shutdown, Trump 2020 flags, hats and shirts have been very evident, particularly at the large demonstrations in states run by Democratic governors. They have taken on the look of small Trump rallies.The politicians most vocally calling for the shutdown to be lifted now, like Dr Rick Becker of North Dakota, are mainly Republicans. All of the governors who did not impose stay at home orders, like the governor of South Dakota, also belong to the president’s party.While the GOP does have its libertarian streak, Professor Skocpol feels that there is more to it than that, and that many of the people and politicians protesting are taking their cues from the president.

“Donald Trump is really not all that secretive about what he’s thinking, he sort of says it. I think that there’s a lot of evidence that he’s worried that this terrible pandemic and his handling of the early stages, combined with the economic impact, could sink his presidency,” she says.”You can’t expect him, his party and those who support him to sit back and take that lightly, so what is plan B or C? It is to go from blaming Obama, the Chinese, the WHO, to now blaming those who are leaving restrictions in place.”Indeed, over recent weeks, Donald Trump has openly supported the protesters.But mixed messages from the White House have been a feature of this crisis. After signalling that he wanted some Democratic-run states “liberated” and opened up, the president then said he was “unhappy” when the Republican governor of Georgia made the decision to reopen the economy.With many hundreds still dying of the virus here each day, state governors are in the tough position of trying to make the right decisions to keep people safe. But it is the face of a deadly virus on the one hand and massive economic and political pressure on the other.Additional reporting by Eva Artesona
,
BBC News 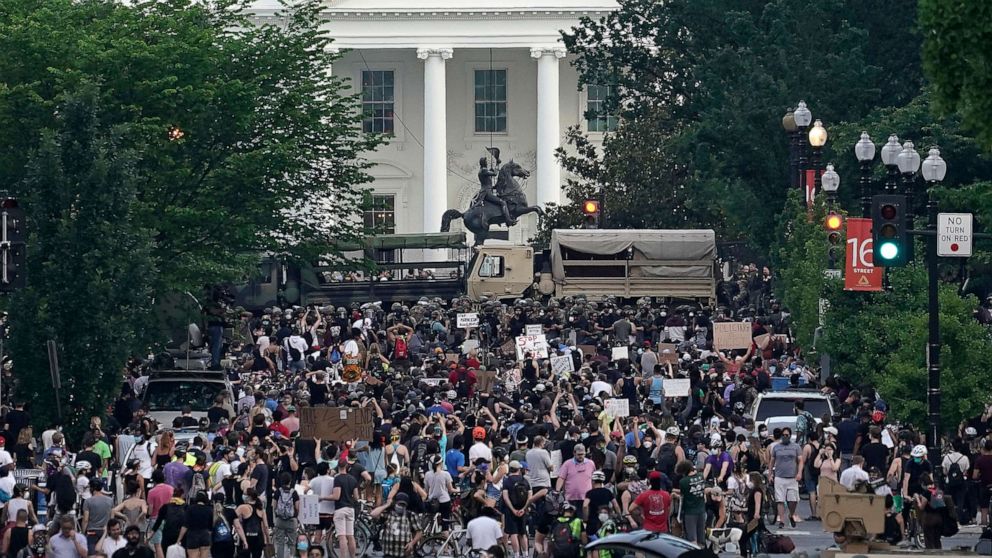 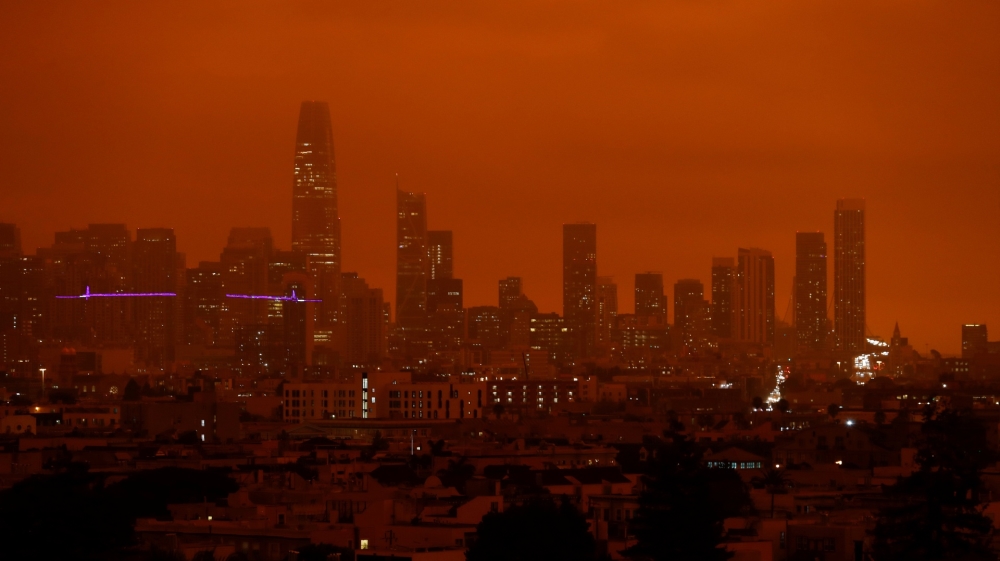 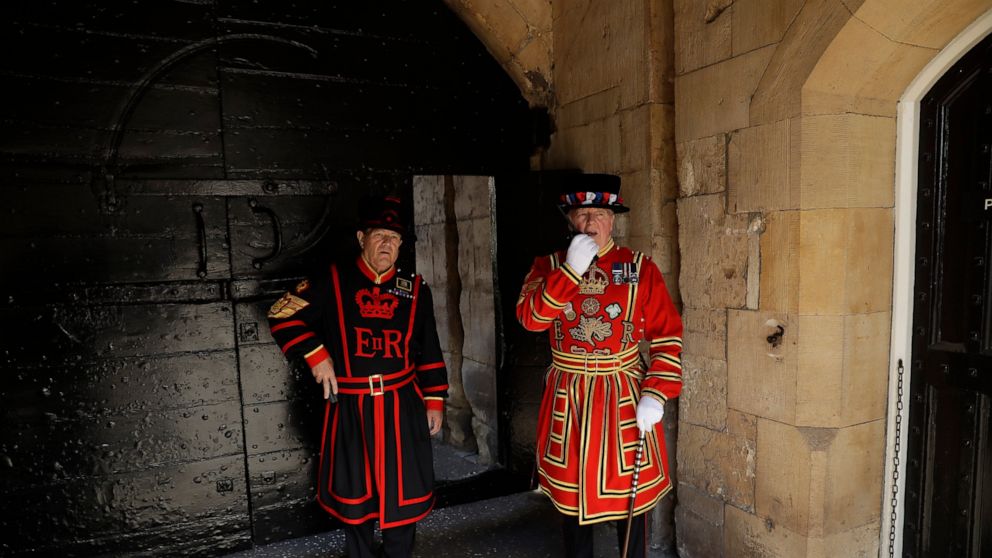